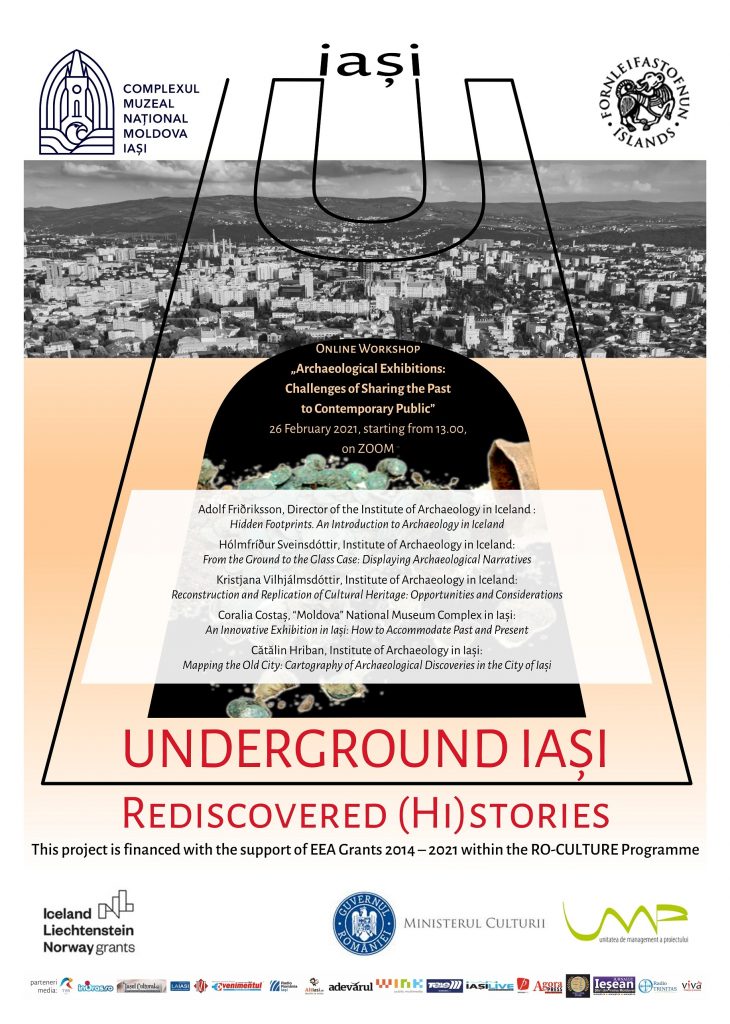 ”Moldova” National Museum Complex of Iași, in partnership with Fornleifastofnun Islands (Institute of Archaeology in Iceland), of Reykjavik, is implementing during February 2020 – June 2021, the project ”Underground Iași – Rediscovered (Hi)Stories”, financed with the support of the EEA Grants 2014-2021 with the RO-CULTURE Programme, the call ”Innovative Cultural Exhibitions of Restored Objects Supported”.

In this context, on 26 February 2021, the educative workshop “Archaeological Exhibitions: Challenges of Sharing the Past to Contemporary Public” will be organized online, by means of the ZOOM platform. The event, in English, addresses mostly specialists from fields such as archaeology, history, museum studies, geography, tourism, without excluding any discipline. For a wider impact, we also encourage the general public to attend the event and thus enlarge the knowledge about cultural heritage. Interested persons should use the link https://eu01web.zoom.us/j/68050257841

The workshop includes the following lectures and presentations:

Adolf Friðriksson: “Hidden Footprints. An Introduction to Archaeology in Iceland”

Adolf Friðriksson studied Archaeology and History and Philosophy of Science, and has a BA (Hons.) and M.Phil. degrees from University College in London, and a Doctorate degree from Sorbonne in Paris. He is currently the Director of the Institute of Archaeology in Iceland, and Senior Advisor to the new Viking Age Museum in Norway. His numerous publications and research projects lie in the fields of history of archaeology, Viking studies, and landscape archaeology.

Hólmfríður Sveinsdóttir: “From the Ground to the Glass Case: Displaying Archaeological Narratives”

Kristjana Vilhjálmsdóttir has a BA in Archaeology with a minor in Art History from the University of Iceland and an MSc in Conservation Practice from Cardiff University, UK. She has worked both as an archaeologist and as conservator of archaeological, social history and art collections.

Coralia Costaș: “An Innovative Exhibition in Iași: How to Accommodate Past and Present”.

Since 2007 head of PR, Projects, Programmes Department within ”Moldova” National Museum Complex of Iași, Romania, Coralia Costaș, PhD, has lately focused on the concept of cultural mediation and on the necessity of raising awareness at the level of the general public as for the treasures of the past hidden in the ground.

Cătălin Hriban, ”Mapping the Old City: Cartography of Archeological Discoveries in the City of Iași”.

Cătălin Hriban, PhD, is senior researcher within the Institute of Archeology of the Romania Academy – Iași Branch, his main themes of interest being medieval urban topography, urban archeology, medieval townscapes

The project ”Underground Iași – Rediscovered (Hi)Stories” and the exhibition with the same title capitalize the local heritage items resulting from archaeological excavations undertaken in areas surrounding the historical center of the city of Iași, during urban development projects carried out during the last decades. Without the careful archaeological surveys followed by minute conservation-restoration activities, heritage items such as those selected for this exhibition project could have been lost or destroyed forever. From discovery to display, the way is long and sometimes difficult and full of surprises. Trans- and interdisciplinary, as well as inter-institutional and international cooperation has a  massive role in recovering and presenting to the public artifacts that bring new information about the past.

The project ”Underground Iași – Rediscovered (Hi)Stories” is financed with the support of the EEA 2014-2021 Grants, within the RO-CULTURE Programme, the call ”Innovative Cultural Exhibitions of Restored Objects Supported”. Total project amount is  617,288.12 Ron (129,083.06 Eur).

The RO-CULTURE programme is implemented by the Ministry of Culture through the Project Management Unit and has the overall objective of strengthening economic and social development through cultural cooperation, cultural entrepreneurship and cultural heritage management. More details are available on the www.ro-cultura.ro.

"Palaces under the Palace" mini-conference

The Exhibition "Underground Iași – Rediscovered Histories” at the Palace of Culture 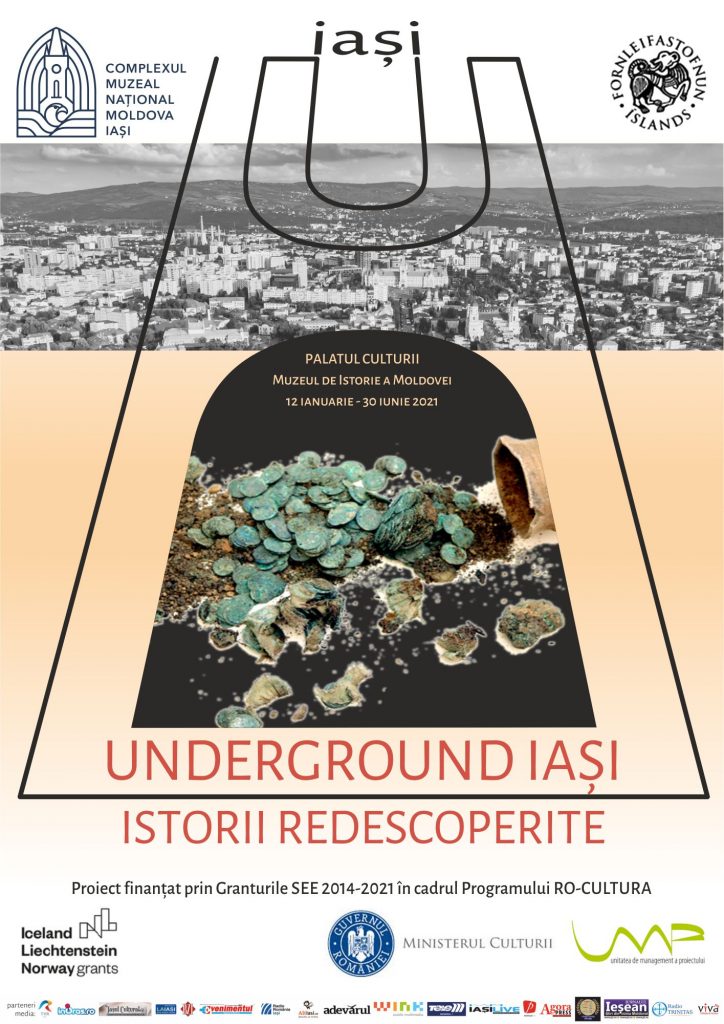 Moldavia’s History Museum within “Moldova” National Museum Complex in Iași invites the public at the Palace of Culture to visit during the period 12 January – 30 June 2021 the exhibition “Underground Iași – Rediscovered (Hi)Stories”, whose opening will take place on 12 January 2021, at 2.00 p.m., complying the social distancing rules imposed by the Covid-19 pandemics. The event will be broadcast live on the facebook page of the project promoter and on the project specific facebook page. The access in the exhibition will be free of charge throughout its  entire duration.

Created within the homonymous project,  the exhibition “Underground Iași – Rediscovered (Hi)Stories” aims at pointing out the local heritage items discovered by means of archeological researches performed in areas surrounding the historical center of the city of Iași with the occasion of the implementation of urban development projects during the last decades. The exhibition excursus itself is completed with documentary information regarding this space, interactively organized, the innovative elements being found mainly at concept level. Generally speaking, the Middle Ages in the area east of the Romanian Carpathians have been known mainly through the religious heritage, which includes both the cult edifices that survived from those times, and the  movable heritage items that are specific to them, and to a lesser extent though what is known from documents or testimonies of foreign travelers.

This exhibition project highlights for the first time neither the religious life, nor the court life, on which there are rather numerous and consistent pieces of information, and the possibility of corroborating data in documents with the archeological ones, but the area surrounding the Princely Court, the area where craftsmen and merchants would live, according to their own rhythm, dependent only to a certain extent on the one of the Princely Court.

The heritage items have been thematically selected and subjected to spatial and chronological filters, focusing on the second half of the 16th century and the entire 17th century, i.e. the period when the capital city of the Country of Moldavia was moved from Suceava to Iași, a fact that determined a specific urban development.

As for the museum displaying technique and complementary materials, as well as at the level of implementation of the exhibition message, the thematic discourse involves the integration of cutting edge techniques and technologies, so to bring the past and the way people would live in those days closer to the general public. In few words, the exhibition can be described as designed to provide a immersive experience, like a show.

The exhibition space was not chosen randomly. Under the glass floor which represents about a fourth of the exhibition hall surface, there are preserved in situ several foundations and constructive features which point out the architectural evolution of the space of the former Princely Court, i.e. the precise spot where the nowadays Palace of Culture stands.  This space – preserved exactly as in the  time of an archaeological research– is integrated to the exhibition theme. Thus, a beamer, mounted under the glass floor, facilitates for the visitor the visual understanding  of the different constructive phases of the walls and foundations that have been brought to light within the archaeological excavation. This “reenactment” is achieved also by placing under the glass floor one of the items restored within the project as well as some of the tools used by archaeologists on site, while at work. Such a display manner is meant to bring to visitors’ attention to the specialized techniques and methodology applied in the context of archaeological excavations.

The interactive showcases have two focus areas: the exhibits themselves and the screen in the upper part, where video content is displayed in order to complete through text, static image and dynamic image /animation, the real exhibits. Moreover, the exhibited items, pointed out through the precise use and directing of lighting, are placed on a turntable which starts rotating as soon as a visitor comes near the showcase.

Thus, the exhibition provides several innovative features for the Romanian exhibition space: first of all the fact that the showcases “get animated” when the visitors get close to them, as well as the synchronized presentation of the exhibits with the running of complementary information on the upper screens; secondly, the information content is considerably improved through the visualization of exhibits at 360 degrees and provision of animated visual information on the upper screens. This non-formal manner of transmitting knowledge increases visitors’ access to information contained by exhibited items and helps at their replacing in their specific epoch.

The central showcase includes a special item, a diptych sundial created in 1591, by famous instrument maker Hans Trӧschel of Nuremberg, discovered in Iași in 1996, and also its enlarged replica,  which allows the better understanding of the manner in which this time measuring instrument used to operate. Thus, a robotic arm has been designed particularly for this showcase, in order to simulate sunlight. In fact, it reproduces the manner in which the sundial would indicate time. Through its design and central positioning of the showcase, both the sundial and the robotized replica can be observed by visitors on all sides and from above as well.

The exhibition is implemented within the Project “Underground Iași – Rediscovered (Hi)Stories”, implemented by “Moldova” National Museum Complex of Iași in partnership with Fornleifastofnun Islands (The Institute of Archeology of Iceland), based in Reykjavik. The project is financed through the EEA Grants 2014-2021, within the RO-CULTURA Programme, the call “Innovative cultural exhibitions of restored objects supported“, and the total project value is of 617,288.12 Ron.

The RO-CULTURE programme is implemented by the Ministry of Culture through the Project Management Unit and has the overall objective of strengthening economic and social development through cultural cooperation, cultural entrepreneurship and cultural heritage management. More details are available on the www.ro-cultura.ro

Restoration of the 100 coins

Today we present you the 100 coins included in the Project “Underground Iași – Redescovered (Hi)Stories, part of the tresure discovered in Iași, Eremia Popescu street, during the archaeological reseach organized by the Romanian Academy – Iași Subsidiary, The Center of European History and Civilization, which had dr. Stela Cheptea, expert archaeologist as scientific responsible and dr. Bobi Apâvăloaei, archaeologist, as member of the Research team.
The 100 coins, as well as the pitcher they were in, were recently restored in the Research and Restoration-Conservation Center of the National Museum Complex “Moldova” Iași, by restoration experts Mihaela Simon and Codrin Lăcătușu. Numismatic expertise was provided by scientific researcher dr. Marian-Viorel Butnariu. With his help we found out that “it is the oldest Crown issue discovered in Moldavia” and “proves the continuation of the half groș in Poland, launched by Wladislaw Jegello in 1399”. 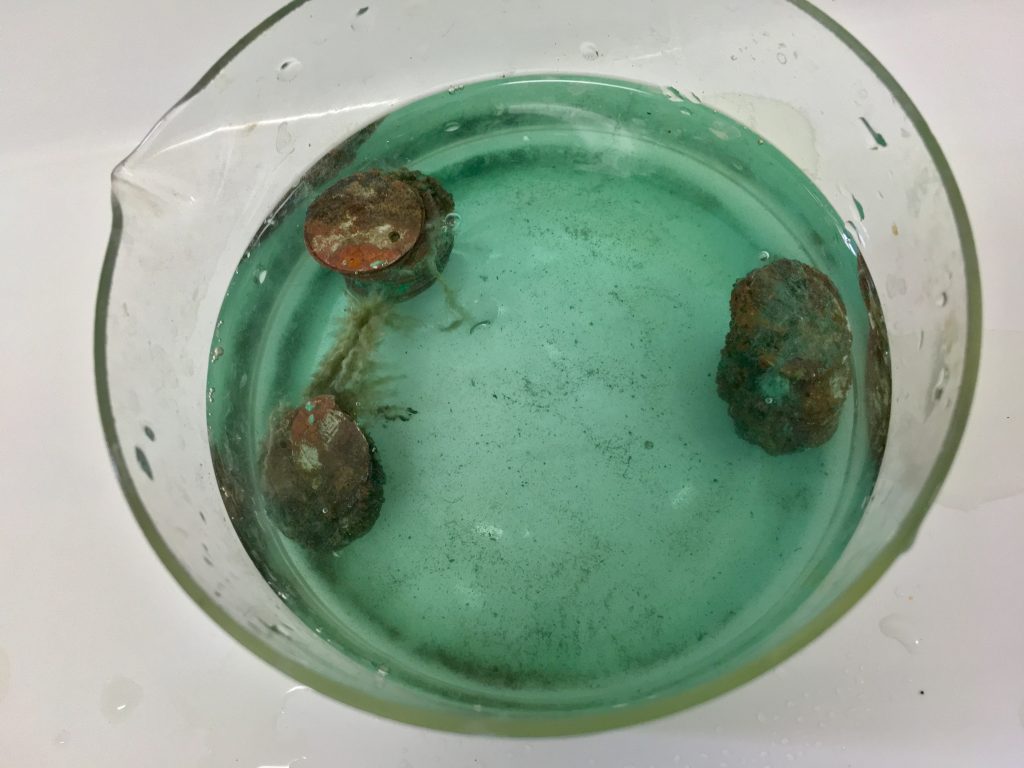 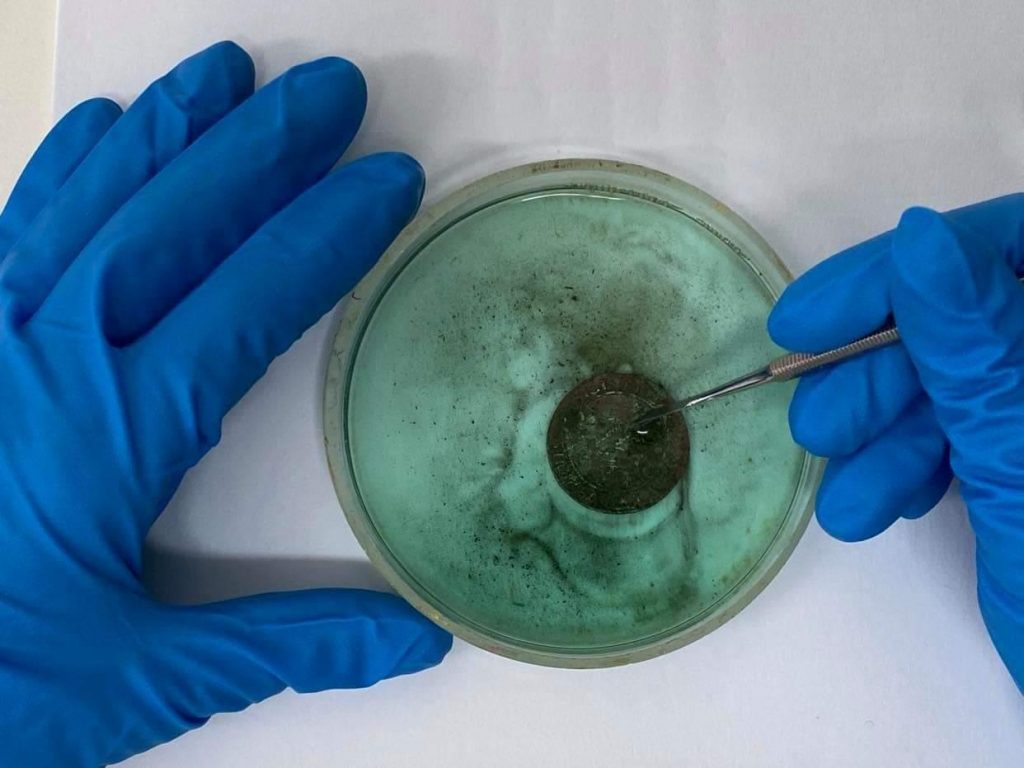 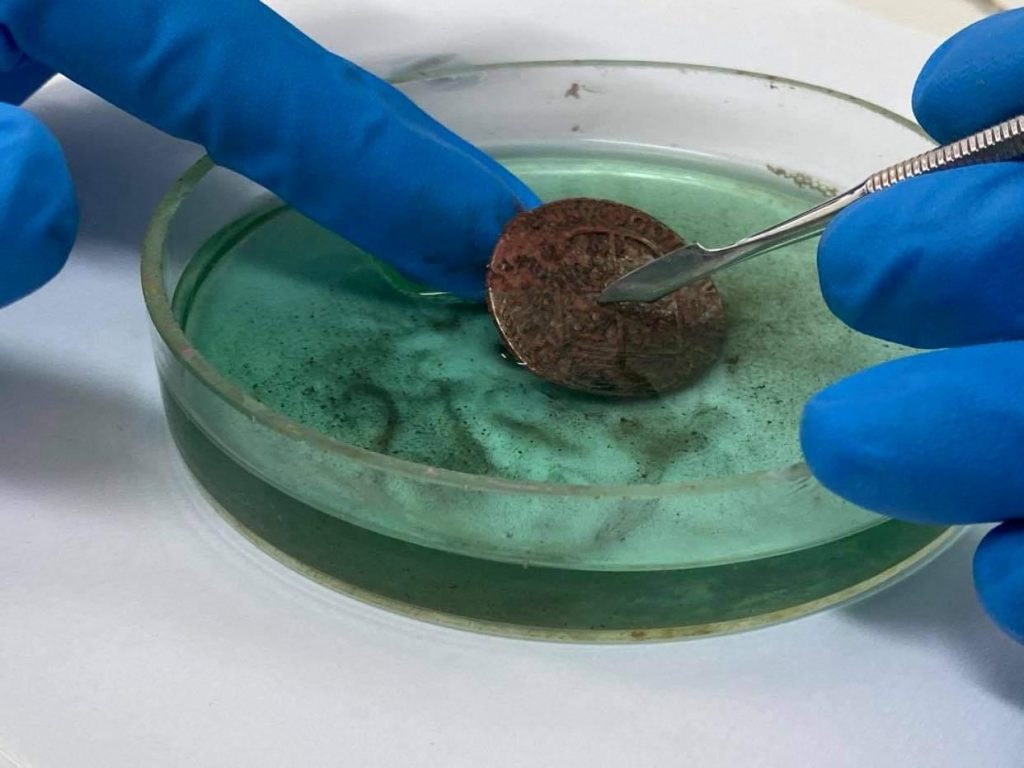 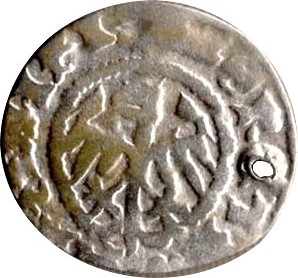 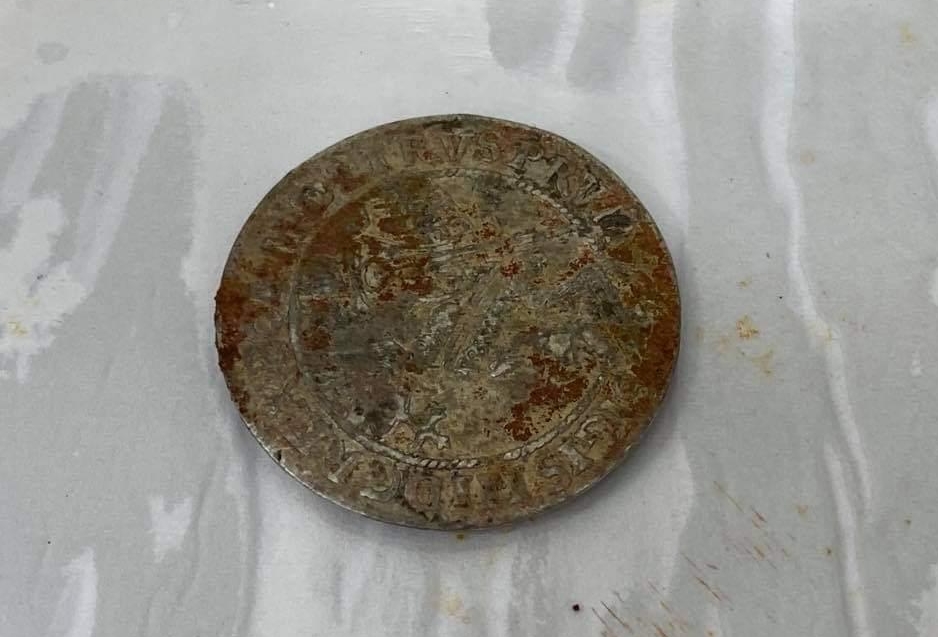 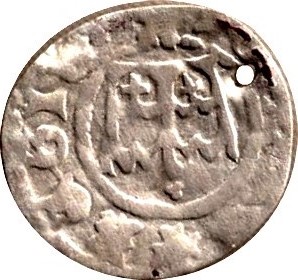 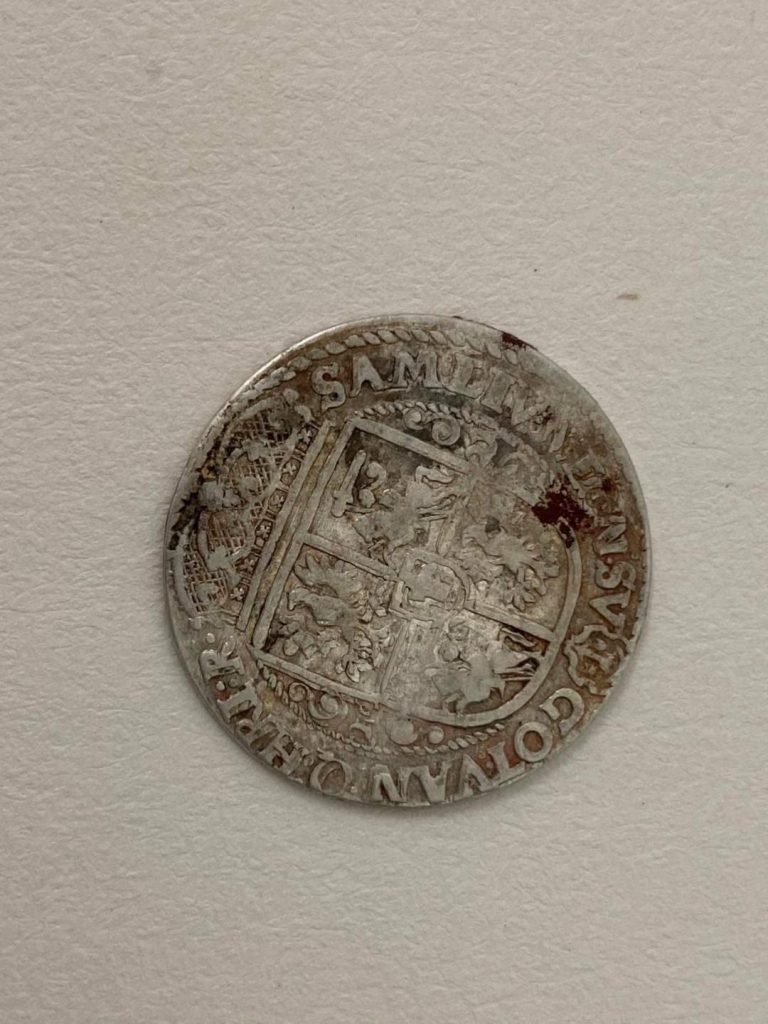